I decided to build my own Frequency Standard from a 10 MHz CFPT-126 TCVCXO (temperature-compensated and voltage-controlled oscillator) and a dsPIC microcontroller which handled an  adjustable frequency division in software when enabled. This oscillator has a typical frequency stability of 0.5  ppm over the entire temperature range (-40 to 80 °C), however at a normal temperature close to ambient I measured a drift of less than 0.1 ppm over several months.

The TCVCXO needs a supply voltage of 3.3 V it also needs a stable reference voltage as an input, which is used to calibrate any offset of the frequency. For this reason the accurate voltage regulator LM1117-3.3 (typ. 0.2 %) was choose for both purposes (even better accuracy could be expected from a separate precision voltage reference for the frequency control).

A separate 5.0 V supply was used to drive the twp output amplifiers (EL7202), which drives the two 50-ohm BNC connectors on the final box. One of the outputs was for the fixed 10 MHz reference clock and the other is for the adjustable frequency divider which stems from the dsPIC microcontroller.

The entire schematic can be seen here (click to enlarge):

The PCB was designed in the software Altium Designer as a 2-layer board. Care was taken in order to keep the 3.3 V regulator and the 10 turn potentiometer for calibration close to the frequency-control pin on the oscillator. Also the output amplifiers and their 5.0 V regulator was kept on the other side of the board in in order to minimize noise form the output injecting into the more sensitive oscillator source. The final PCB design is shown here as a 3D rendering directly from Altium: 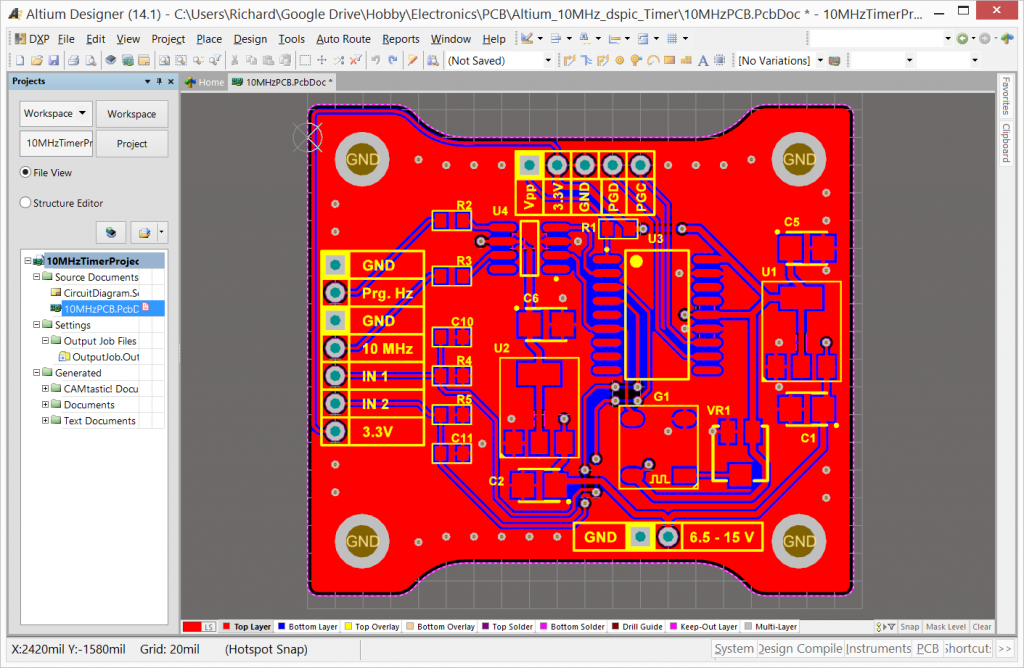 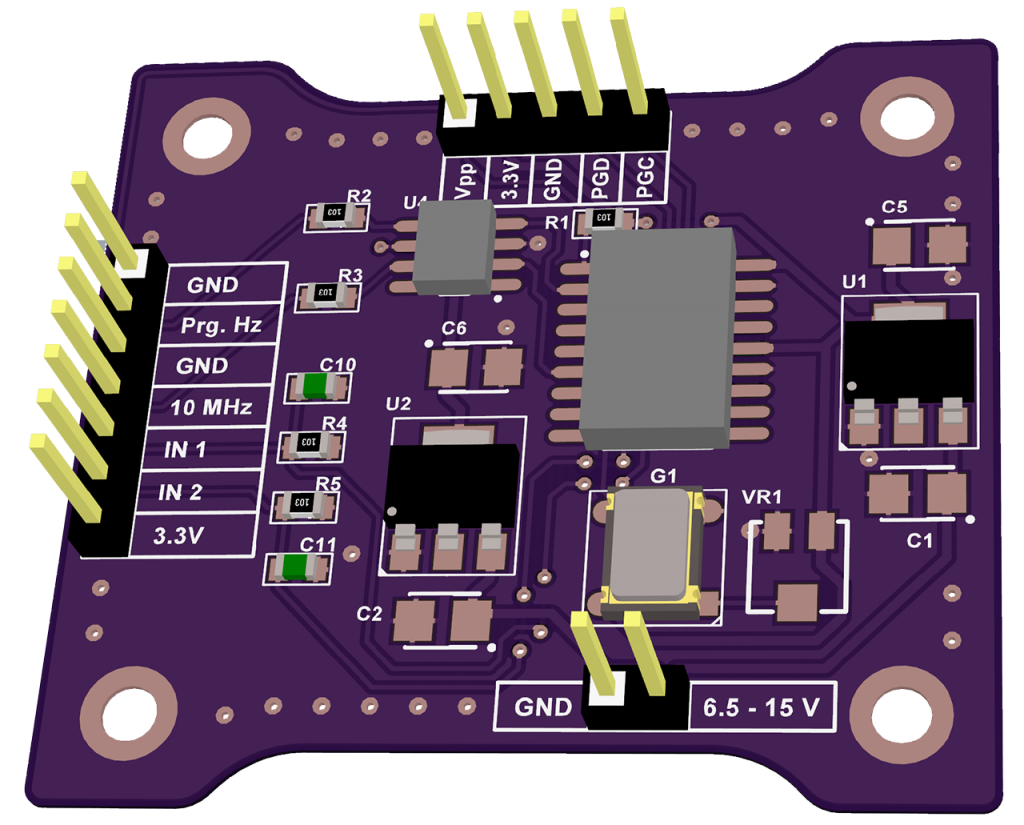 The final board was calibrated against the Cesium atomic clocks in the GPS satellites, they have a typical stability of 0.1 ppt (0.0000001 ppm). However the jitter in the signal they transmit back to earth can be quite severe depending on the movement an position of the satellites. Hence an average over several hours needs to be taken in order to ensure optimal accuracy (metrology-grade GPS-disciplined oscillators can require several days in order to converge to their final frequency). Finally a few pictures of the assembled board before it was mounted inside its shielded box. 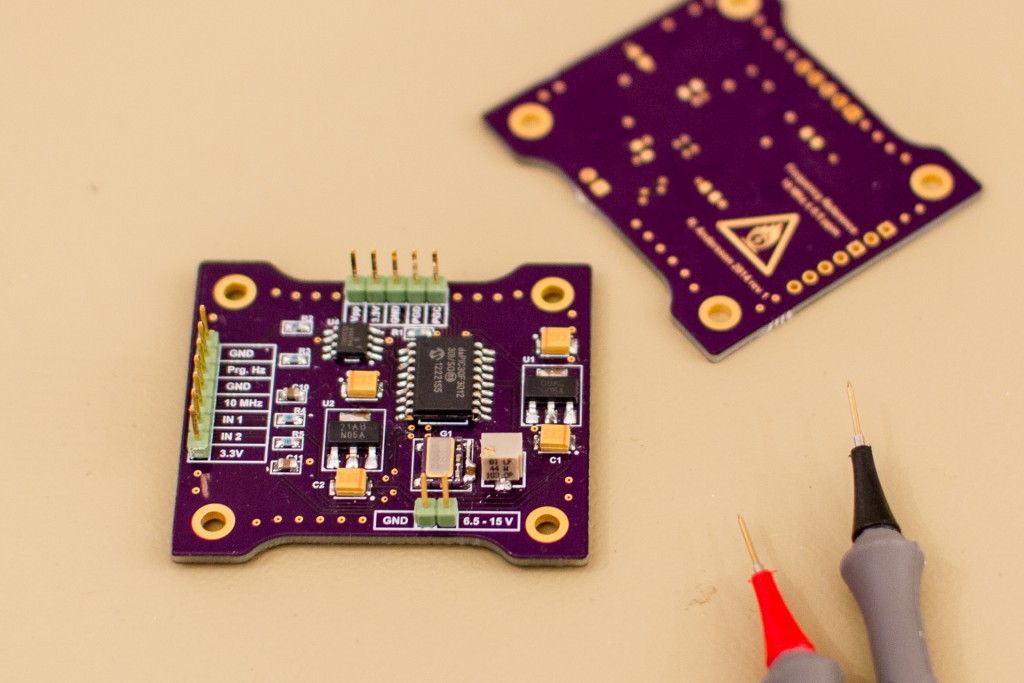 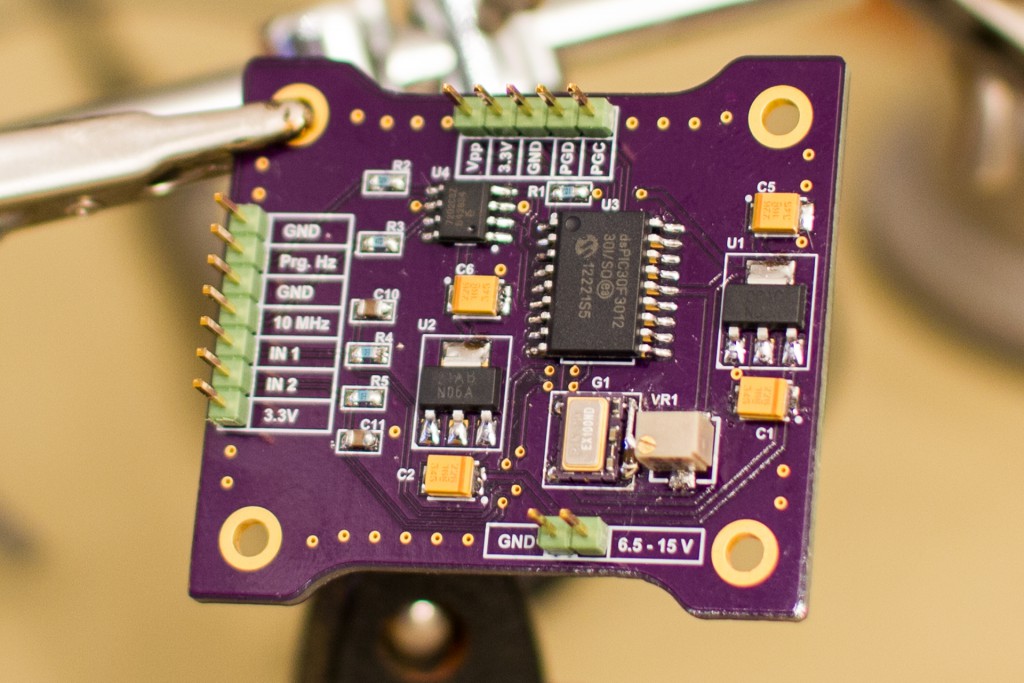